The American theme park business is dominated by large theme park chains. Most of the famous parks are operated by the Walt Disney Company, Universal, SeaWorld Entertainment, Six Flags or Cedar Fair. However, there are exceptions and you’ll even find some family-owned amusement parks in the United States. One of them can be found in Elysburg, Pennsylvania and it’s known as Knoebels Amusement Resort. The park was founded in 1926 and it has been owned by the Knoebel family ever since. Knoebels operates a little different than the majority of amusement parks. Admission is free and you pay per ride, using old-school coupons or an all-in wristband.

Knoebels is mostly a family destination, but they’ve got some quite thrilling coasters nevertheless. Phoenix is the oldest operating roller coaster and it has a certain history. It first operated in Texas and it was later moved to Knoebels, where it opened in 1985. It’s not that unusual to relocate theme park attractions, but it’s rather unique for wooden coasters. Anyway… I’m very happy that the Knoebel family bought the ride, because it’s nothing less than awesome. Phoenix has a great sense of speed, the ride is smooth and it delivers remarkably strong airtime. This is one of the USA’s best wooden coasters, if you ask me.

Twister is another famous wooden roller coaster and it was placed at the opposite side of the park. It’s an aesthetically pleasing ride with some quite unique elements. The lift hill, for example, consists of two separate parts and the loading station is curved (that explains the ride’s name, right?). Unfortunately, Twister doesn’t match Phoenix’ wonderful ride experience. Despite its fantastic layout, the coaster just seems a little too rough to fully enjoy it.

Knoebels became world news in 2013, when their roller coaster Flying Turns was inaugurated. This wooden bobsled coaster was designed and built in-house and it took seven long years to complete. The result is a fun family ride. Don’t expect crazy speeds or an extreme rush of adrenaline, but the ride’s unique character makes up for that. This isn’t just an usual ride, it also features unusual operations. Whether you like it or not… Flying Turns even involves a passenger weight check before boarding! Note that it’s a popular attraction and capacity is limited, so you may want to plan your ride early or late in the day.

Is it a dark ride? Is it a roller coaster? The truth is somewhere in between. Black Diamond is definitely worth a visit, though. This enclosed hybrid coaster reminds me of Blazing Fury at Dollywood and that’s a good thing. Black Diamond has a background story very similar to Phoenix’. It first operated at an amusement park in New Jersey, before getting shipped to Pennsylvania. Despite the fact that Knoebels only opened it in 2011, the ride has a unique character.

Kozmo’s Kurves is the park’s kiddie coaster and last but not least, there’s Impulse. This is by far Knoebels’ least typical coaster. Whereas the other roller coasters boasts some kind of authentic charm, Impulse is a downright modern machine with a bright colour scheme. It was built by Zierer and it opened in 2015. And honestly, this German company did a great job. Impulse looks like an Euro-Fighter (one of my least favourite coaster types) but it turns out to be so much better. The ride is fitted with comfortable restraints and trains run very smoothly. This would actually be a perfect thill coaster for every medium-sized amusement park.

If you love classic amusement park rides, you’ll probably love Knoebels. The park has a whole bunch of flat rides, there are two water attractions and I’ve heard that the park’s Haunted House is very good (it’s closed during our visit, so I’m not able to confirm). One of my favourite Knoebels rides is the Scenic Skyway, which offers magnificent views over the park and its lush green scenery. Knoebels was built in a valley and it’s definitely worth a look from above.

The answer is definitely yes. This park has a unique atmosphere, there are some world-class coasters and prices are very reasonable. This park isn’t about bigger, faster or taller attractions, but it’s a fun place for the whole family. You shouldn’t travel hundreds of miles to see this place, but it’s worth a small detour if you ever travel through Pennsylvania. The Knoebels family should be proud of this place and I hope they will add some other unique/extinct ride types in the near future. Wooden wild mouse, anyone? 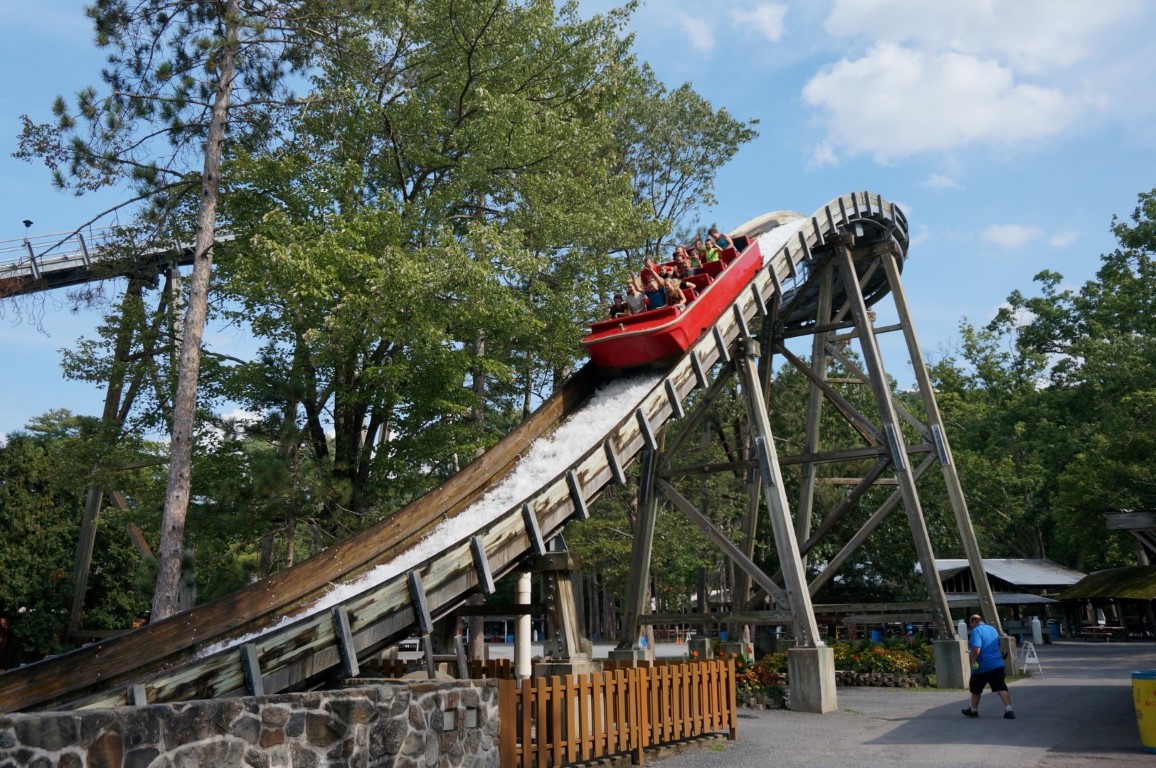 Do you know other rides that require a weight check? What’s your favourite wooden coaster at this park? Would you prefer a visit to Six Flags over a trip to Knoebels? Share your opinion in the comments section at the bottom of this page.