Shanghai is home to Shanghai Disneyland, Happy Valley and some of the tallest skyscrapers in the world. But there’s more. Jin Jiang Action Park, for example, is a small-sized amusement park in one of Shanghai’s suburbs. Just take the red subway line (number 1) to Jinjiang Park Station and you’ll be able to visit this rather bizarre theme park.

Did you know that one of Vekoma’s most legendary coaster types can be found at Jin Jiang Action Park? And yes, I’m talking about a Giant Inverted Boomerang. This 60-metre tall ride offers some of the sexiest Vekoma curves on the planet. I’ve hated Boomerangs since the day I rode my first (and only) one, but I would’ve made an exception for this legendary piece of steel. Unfortunately, my enthusiasm is immediately blocked by a staff member. The worst news we could possibly get, becomes a reality: Giant Inverted Boomerang will not be operating today. Damn…

Fortunately, I was able to ride the park’s other two coasters. One of them is Karst Cave Coaster and I’d describe it as a cheap Zamperla indoor coaster with crappy dinosaur theming. The experience is simply hilarious. This powered coaster makes two laps: one in darkness and a second one with colourful lights turned on. During that second lap, I can clearly see the theming: rocks and static, cheap-looking dinosaurs. The layout is quite long, but it contains a few painful transitions. Anyway… I’m glad I got the credit and this is exactly what I expected from a Chinese indoor coaster: rubbish.

Jin Jiang Action Park’s third and final roller coaster was also manufactured by Zamperla. Moto Coaster is similar to a ride at Särkänniemi in Finland, so I know what to expect (oh well… actually you never know what to expect from a Chinese amusement park). Honestly, Moto Coaster isn’t bad at all. The acceleration is powerful and most parts of the track are pretty smooth. I still prefer Shanghai’s other motorbike coaster, though. Something called… TRON?

The park is also home to a rather unusual shuttle loop coaster. However, it has been SBNO since 2017, according to the Roller Coaster Database.

Jin Jiang Action Park and Zamperla seem to be close friends. The Italians aren’t just responsible for two of the park’s coasters, but it seems as if the park has bought the entire Zamperla catalogue. In other words: you’ll find lots of standard family rides here. Those Zamperla kiddie rides are quite useful, though. Jin Jiang Action Park is mainly visited by Chinese school groups and they seem to love such small rides.

Other attractions that draw my attention are the 108-metre tall Ferris wheel (unfortunately, it requires an extra fee) and the park’s gentle boat ride. This may be one of the most boring rides on the planet. There’s no current, so the boats move at the speed of a snail. However, it’s an ideal attraction if you’ve always dreamed of sailing through an animal’s anus. I don’t judge.

This day would’ve looked totally different if the park’s coaster icon were open. That missed ride on Giant Inverted Boomerang came as a bummer, but I’m still glad that I discovered this place. It’s not as famous as Happy Valley or Shanghai Disneyland and it isn’t difficult to see why: Jin Jiang Park feels old and crappy. Would I recommend a visit? No, I wouldn’t. But if you ever find yourself in Shanghai, desperately wanting to ride a Vekoma GIB… this might be the place to go. Let’s hope that the ride will be open, then. 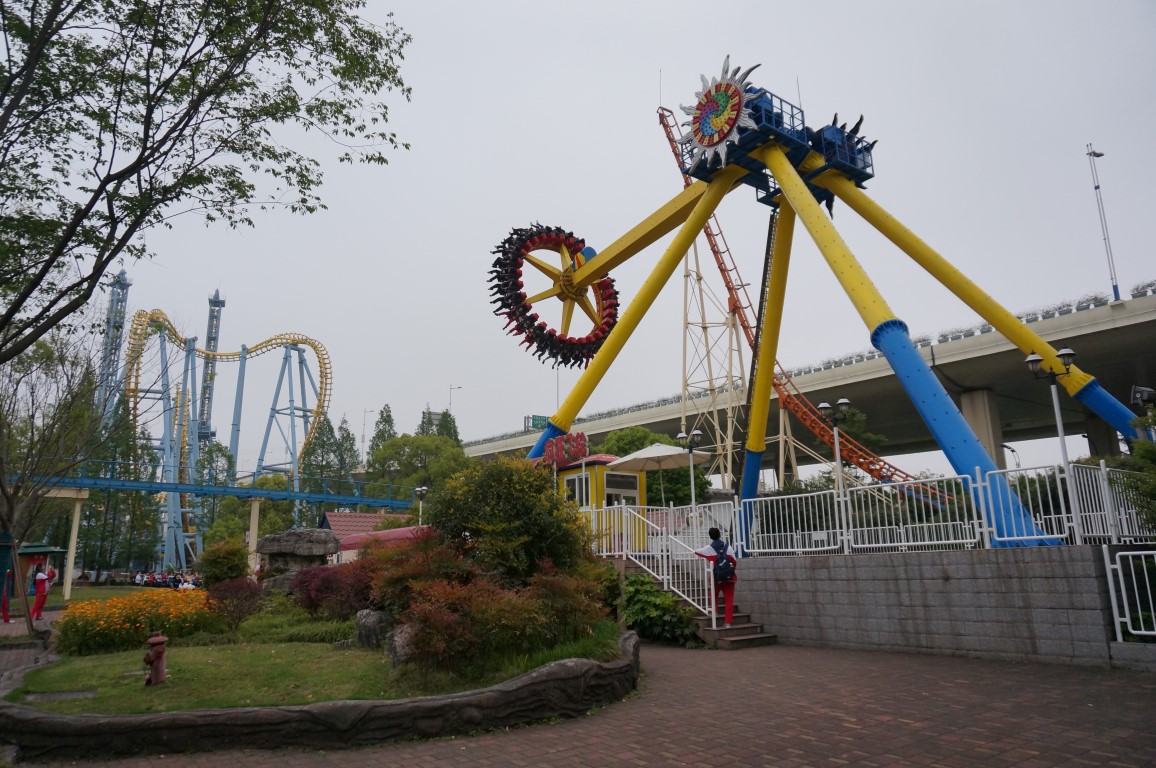 Are you interested in visiting Jin Jiang Action Park? Is a Giant Inverted Boomerang Vekoma’s best roller coaster type? And what do you think about the dog’s anus boat ride? Share your thoughts in the comments section at the bottom of this page.