“Italy’s largest theme park has a lot to offer”

As one of Europe’s premier tourist destinations, Lake Garda draws big crowds during the summer season. That’s why this is the ideal location for Italy’s biggest theme park: Gardaland. The park is owned by Merlin Entertainments since 2006 and the group added quite a few attractions over the last decade. I’ve visited the park multiple times and I’ve had mixed experiences. How does the park perform during a pandemic? Let me put on my face mask and I’ll find out.

One of Gardaland’s best rides is without a doubt Raptor, the world’s first B&M Wing Coaster. If you’re familiar with Merlin Entertainments, you may know that they prefer dark themes. At Thorpe Park, the Wing Coaster is located in a post-apocalyptic district, Heide-Park chose a demonic village and here at Gardaland, you’re entering the terrain of a wild predator. It’s not cheerful at all, but the industrial setting works surprisingly well. The actual ride is a ‘hit or miss’, depending on your personal preferences. I like relaxed roller coasters, so Raptor is perfect for me. However, if you’re into thrilling and intense rides, Raptor may feel a little underwhelming.

Another highlight is Oblivion – The Black Hole, a Dive Machine that opened in 2015. The ride experience is similar to most other European vertical drop coasters. It features a 42-metre lift hill, a surprisingly intense drop and two inversions. Be sure to ride it in the back seats for some of the best airtime you can experience in Europe. Oblivion’s decoration is also noteworthy: the visual effects surrounding the ride’s iconic black hole are very impressive.

One of the park’s most popular family rides is Mammut, a Vekoma mine train themed to a snowy expedition. Unfortunately, the ride is rougher than it’s supposed to be. Did Vekoma accidentally make square-shaped wheels? I have no idea, but Mammut is pretty horrible. Besides, the decoration doesn’t make up for the rough ride experience. The polar expedition theme is original, but the ride has lost a lot of its charm during the past few years. The rocks have faded and the confrontation with the mammoth – the highlight of the ride – is disappointing.

Gardaland offers a total of 8 roller coasters. The lineup includes those two B&Ms and the mine train mentioned above, some basic kiddie coasters, two standard Vekoma coasters and a weird thing called Sequoia Magic Loop. This is a so-called Screaming Squirrel built by S&S, but it’s closed during the coronavirus period. I don’t regret this decision, as the ride is literally worthless. The experience is painful, the location looks odd and capacity is dramatically low. Definitely one of the worst thrill rides in Europe.

Summers can get hot in Italy, so Gardaland provided a few ways to cool down. The park’s main water rides are called Fuga Da Atlantide and Jungle Rapids and they both look stunning. Especially Jungle Rapids shouldn’t be missed, as this is one of Europe’s nicest rapid rivers. This raging river flows through an exotic setting and it includes a volcano, some impressive temples, mysterious Hindu statues and an exciting soundtrack.

At the opposite side of the park, you’re able to ride Colorado Boat. This is the park’s log flume and unfortunately, it’s less impressive than both other water rides. Theming is limited and the ride is simple. Europa-Park fans may recognise the layout, since its identical to Tiroler Wildwasserbahn. The Italians seem to love Colorado Boat and queues get quite long, but I would skip this ride if the wait is longer than 20 minutes.

Gardaland is one of many theme parks with a pirate dark ride. I Corsari – la Vendetta del Fantasma is a classic pirate attraction with boats. It has been there since 1991, but it was thoroughly refurbished two years ago. Unfortunately, the attraction’s biggest fails weren’t fixed. The unfinished ceilings and the ugly corridor towards the exit are still there. The layout and most scenes remained completely intact as well, but Gardaland invested a lot of money in projections and screens. That’s a cheap solution to categorise this dark ride as ‘new’ and the added value is zero. I actually preferred the previous version.

Gardaland is one of the world’s most fragmented parks when it comes to theming. The park’s experiences are themed to Atlantis, India, fighter jets, Kungfu Panda, pirates, the arctic and so on. Gardaland even has UFOs! The so-called Flying Island is the Italian answer to Pagode at Efteling. I like its contemporary appearance, but the ride is unfortunately far too short to fully enjoy the views. The neighbouring Space Vertigo is one of Europe’s smallest free fall towers, but it offers a thrilling experience nonetheless.

Overall, I had a very enjoyable day here at Gardaland. However, there are some imperfections. A few areas aren’t themed as nicely as others and I encountered a few uninteresting, outdated attractions. Merlin parks are also known for their sneaky ways to sell FastLane tickets. Those Express passes aren’t used during the pandemic and this obviously has a positive impact on the regular queues. Oddy enough, it even seems as if the overall capacity is higher during the coronavirus. I don’t remember Gardaland as a high-capacity park, but the Gardaland I experienced in August of 2020 barely had any lines. I’d never thought I’d say this, but the corona version of Gardaland is actually the best Gardaland I’ve ever seen. Hooray for corona?! 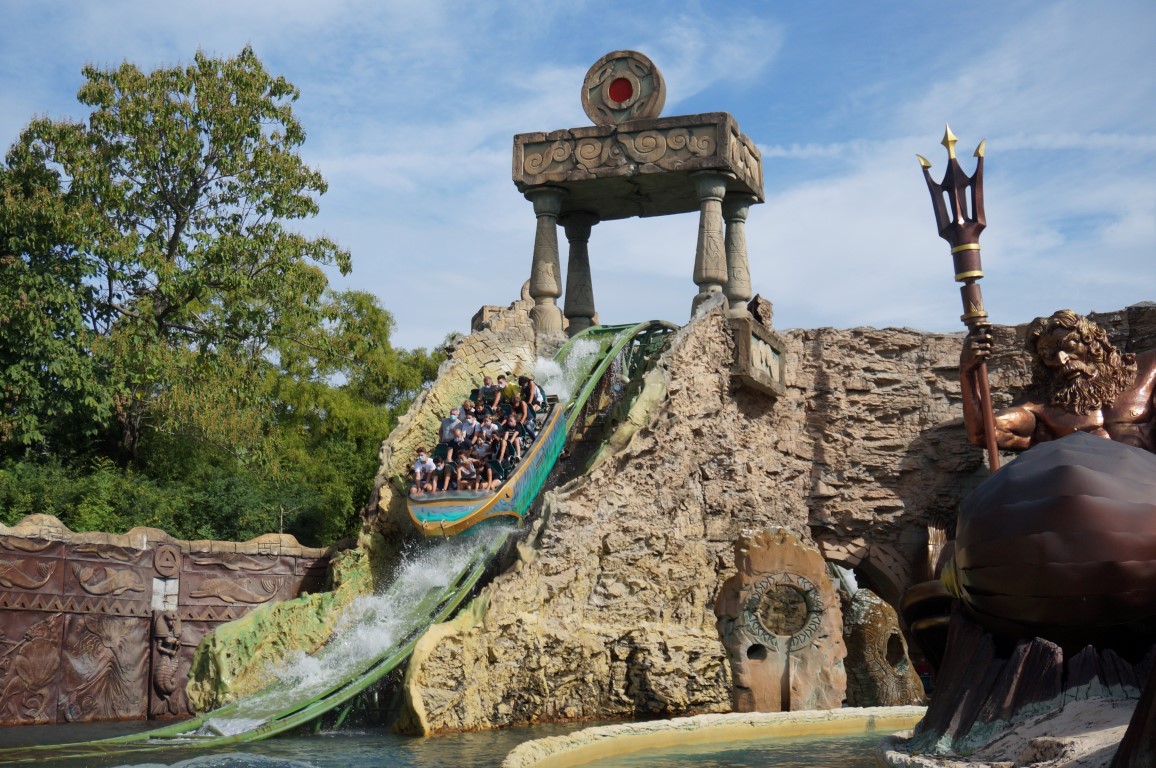 Do you like Gardaland’s unusual theming? What’s your favourite attraction at this Italian theme park? And do you agree about the fact that Sequoia Adventure is worthless? Share your opinion in the comments section at the bottom of this page.