“Cedar Fair at its worst”

Greetings from Richmond. The name of this American city may not sound familiar to an average European tourist, but it’s a huge draw for coaster enthusiasts. That’s because there are two major coaster parks near Richmond. Busch Gardens Williamsburg is located about 50 miles east of the city and Kings Dominion lies north of it. Today we’re visiting Kings Dominion and our expectations are high: this park is home to one of the planet’s most notorious thrill coasters and Kings Dominion is a member of Cedar Fair. And although Cedar Fair parks may not have the most adequate theming, they have always impressed me in other ways. In general, they’re high-capacity parks with friendly staff and a perfect ride selection. Unfortunately, Kings Dominion doesn’t perform at the same level during our visit. Staff members seem uninterested and coasters are dispatched at a horribly low speed. To make matters even worse, many coasters experienced technical difficulties during the day. Crowds were manageable, but we spent hours and hours in long, slow-moving queues. Ouch.

Kings Dominion is a typical American amusement park. That means that it focuses on thrill rides rather than decoration. However, they did their best to create a few themed lands and Safari Village is one of them. This area is home to a whole bunch of coasters, but some of them feel like they’re out of place. Can someone explain me why a Swiss-themed bobsled coaster is placed in an exotic land? This really confused me, but Avalanche is a fine coaster nonetheless. It’s the only Mack bobsled coaster currently operating outside of Europe and it’s considerably smoother than many of its siblings. Avalanche may feel a little lonely nowadays, because his neighbour left a few years ago. Luckily, we were able to ride the legendary Volcano – The Blast Coaster in 2017, only a year before it was closed forever. This inverted coaster was notorious for its double launch and damn… that was incredibly intense. However, the rest of the layout was rather monotonous, so I will not miss Volcano that much.

Flight of Fear is Kings Dominion’s space-themed indoor coaster. Operations were horrible, so we waited almost an hour, despite the short line. After putting my patience to the test so badly, I really hoped for a great roller coaster. However, I left disappointed: Flight of Fear turned out to be rather rough, it mainly consists of pointless curves and there’s not the slightest bit of theming during the ride. So please just skip this coaster if you don’t necessarily need the credit.

Kings Dominion has put itself on the international map in 2010, when Intimidator 305 opened. This is an enormous giga coaster and it’s the main reason to visit Kings Dominion for many coaster enthusiasts. The lift hill is 93 metres tall, there are 1,500 metres of tracks and trains reach top speeds of 145 km/h. In short: this red giant is serious business. During its opening year, some of the business were actually a little too serious. Intimidator 305 even had to be rebuilt to lower the amount of rider blackouts. At first, Kings Dominion installed extra brakes on the first descent. Later, they modified the entire first curve to decrease intensity. But if you think that Intimidator 305 has become some kind of child-friendly roller coaster because of all those modifications, then you’re wrong. This ride is extremely forceful (yet comfortable) and it definitely woke up the coaster nerd in me. Luckily, operations at Intimidator 305 were pretty fast and we were able to re-ride it a few times.

Safari Village is also home to Anaconda (a 25-year old Arrow multi-looper) and Back Lot Stunt Coaster (the former Italian Job ride), but these rides aren’t that special. Then I definitely prefer a ride on Dominator, Kings Dominion’s B&M floorless coaster. The layout is particularly original for this coaster type and the smoothness is remarkable. Unfortunately, operations are once again poor. B&M coasters of this size are meant to have a huge capacity, but staff are so lazy that they only achieve one train dispatch per five minutes. Painful, very painful.

All of the park’s main roller coasters can be found in the eastern half of the park. Or at least, this was true during our visit in 2017. At that time, the other side of the park was home to two very mediocre wooden coasters and a wild mouse. However, in 2018 Twisted Timbers has made its debut. This is an RMC remake of the former Hurler and it looks like a perfect addition to the park’s coaster assortment. I haven’t ridden it yet, but it may seduce me to pay another visit to Kings Dominion.

Kings Dominion has everything you’d expect from a thrill-minded amusement park. The park offers a good amount of coasters and there are quite a few flat rides. However, families aren’t forgotten. You’ll find two soaking water rides at the Old Virginia area and the child-friendly Planet Snoopy looks very cute. Besides, Kings Dominion is home to a large water park called Soak City. One particular attraction I’d like to mention is the Eiffel Tower at International Street. This structure looks very impressive and its panoramic platform offers some incredible views of Kings Dominion and its surroundings.

If Kings Dominion always performs as poor as we experienced, I would not recommend a visit. Most of our annoyances could be blamed on the uninterested, work-shy staff and the low capacity. That’s unfortunate, because I was really looking forward to this park. It boasts lots of thrilling coasters, spectacular flat rides and a large children’s area. You don’t need to visit this park if you’re interested in elaborate decoration, but that’s basically the case at any Cedar Fair park. I just don’t see why operations were significantly slower than they are at the sister parks. I really hope that this was just one bad day, as Kings Dominion didn’t manage to deliver the carefree day I expect from amusement parks. 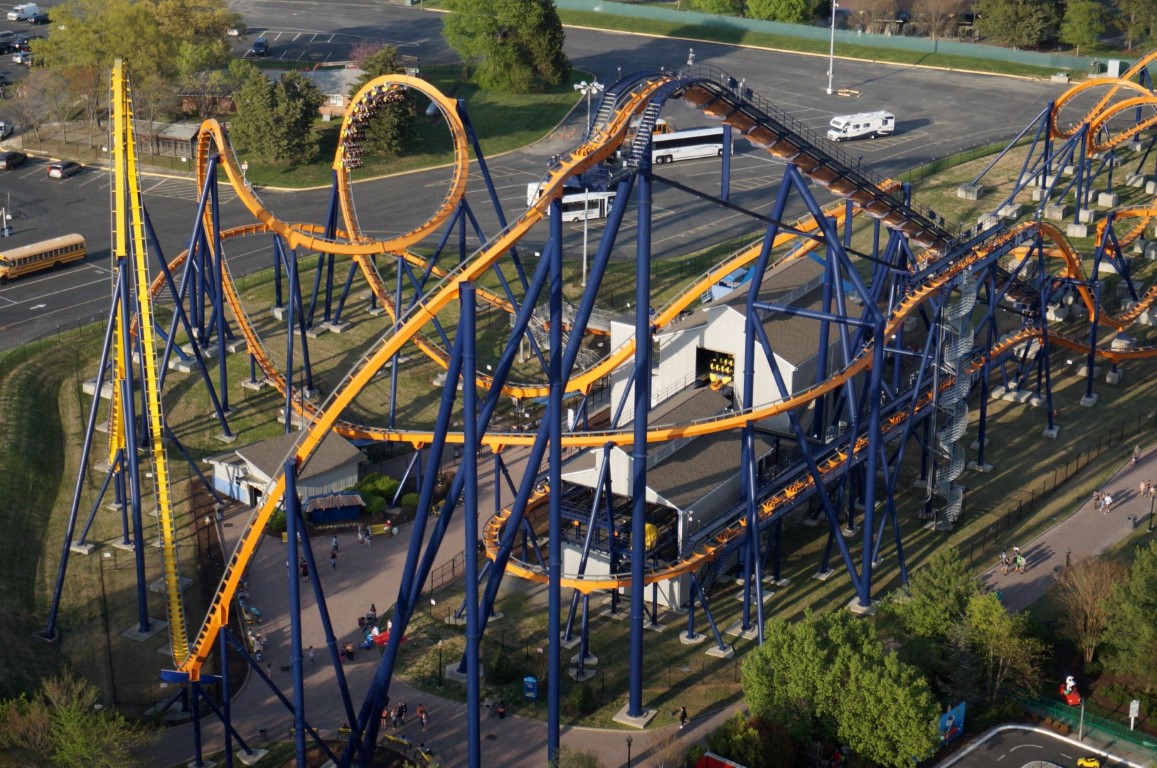 Does Kings Dominion usually perform better than this? Does Intimidator 305 deserve all the praise it gets? And is Safari Village the weirdest area in a theme park? Share your opinion in the comments section at the bottom of this page.